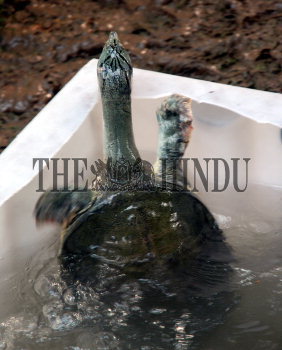 Caption : NEW DELHI: Wildlife SOS (working to save wildlife) protection workers display a tortoise which was seized by wildlife workers in New Delhi on October 18, 2006, after South Delhi police exposed a shop dealing in animals banned under the 'Wildlife Protection Act'. Some 48 tortoises were seized from a shop in south Delhi whose owner was trying to smuggle tortoises out of the country and now kept at former Union Minister and Animal Rights Activist Maneka Gandhi's residence in New Delhi. Photo: Shanker Chakravarty