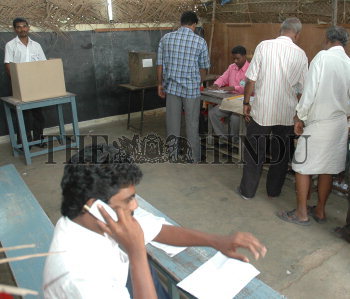 Caption : CHENNAI : Though election officials had announced that mobile phones are not allowed to be used inside polling booths, a polling agent inside a polling booth in M.P.Devadas High School in Vyasarpadi, where repoll for ward 35 was conducted on Sunday, was seen freely making calls. Photo : R. Ragu (15-10-2006)