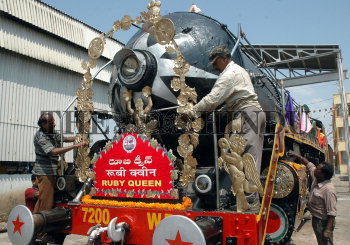 Caption : HYDERABAD: The ' Ruby Queen ' , steam engine that is to make a heritage run from Secunderabad to Falakhnuma on October 14, 2006, gets a make over at the Kacheguda Station on Friday , in a run up to the countdown . The steam loco No: 7200WP is the first of the series of locomotives of post war design manufactured by M/S Baldwin Loco Works USA . The loco was used in the shooting of the Hindi flick 'Rang-de-Basanti 'in 2005. Photo: P.V. Sivakumar (13-10-2006)