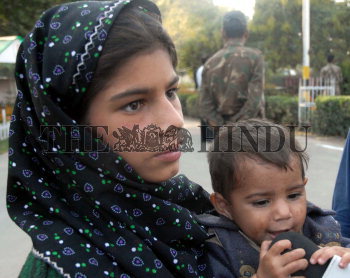 Caption : Daughter of Farid Ahmad Ganaie (not in the picture) seen with her brother at a press conference in B.B. Cant in Srinagar on October 11, 2006. Farid was apprehended with his family members by Army troopers while trying to cross into this side of Line of Control along Uri sector, Army said. Farid claimed that he had been forcibly taken to PoK along with his pregnant wife in 1993 by two Al Barq militants. Photo: Nissar Ahmad