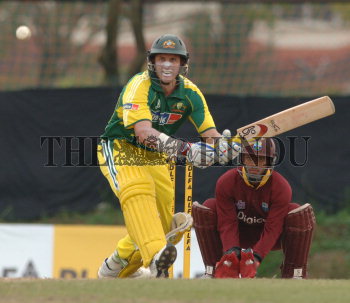 Caption : Australia's Mike Hussey eyes the ball to a four off Chirs Gayle as Wicket Keeper Carlton Baugh looks on during the Final match between West Indies and Australia in the DLF Cup in Kuala Lumpur on September 24, 2006. Photo: S. Subramanium