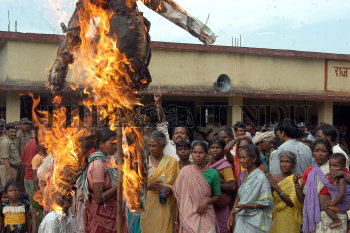 Caption : The tribal villagers and victims family members of the Tetratoli village burning efigy of the alleged anti-social element Tileswar Sahu near Kurkura Bazar in Gumla district of Jharkhand on September 19, 2006. Nine tribals and four non-tribal people were killed in a major clash between tribal villagers and a non-tribal anti-social group in Tetratoli village, around 175 km away from Ranchi on September 18, 2006 evening. About 5,000 tribal people from several surrounding villages gathered at Kurkura Bazar today to protest against the administration as well as the government for taking no action of such frequent incidents where innocents are being killed. Photo: Arunangsu Roy Chowdhury Ranchi