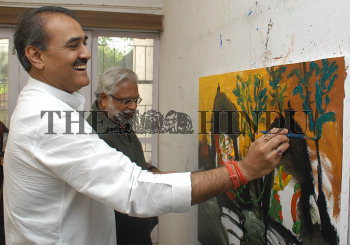 Caption : Different strokes:The Minister for Civil Aviation, Mr Praful Patel tries his hand at painting at the studio of Manu Parekh in New Delhi on September 15, 2006. The canvasses will be put on auction and the money raised would be used for an age old home that the NGO KHUSHII has adopted. Photo: Kamal Narang