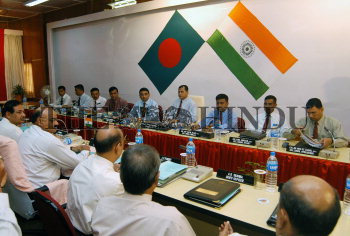 Caption : Officials of Indian Border Security Force (BSF) and Bangladesh Rifles (BDR-in blue dress) attending the border co-ordination meeting at the BSF's frontier headquarters in Shillong, capital of Meghalaya State on August 29, 2006. In this high level meeting both BSF and BDR discussed issues like recent firing by BDR in Asom's Cacher sector, border fencing and floating border out posts between the two countries. BSF has handed over a list of 172 Indian INSURGENTS' camps in Bangladesh and ask for their dismantling. BDR was also asked by the Indian authority for handing over of Anup Chetia, General Secretary of the banded militant organization United Liberation Front of Asom (ULFA) jailed in Bangladesh and other militants leaders camping in Bangladesh. The meeting will continue for next two days. Photo: Ritu Raj Konwar