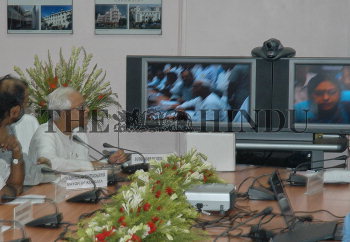 Caption : Chief Minister of West Bengal, Buddhadeb Bhattacharjee along with Mayor of Kolkata Mr. Bikash Ranjan Bhattacharya going through the video conferencing system of the Kolkata Municipal Corporation (KMC) on the inaugural day from the conference hall-1 of Central Municipal Office in Kolkata on August 23, 2006. As a part of the e-governance project with a support from DFID, United Kingdom, the system will connect the 15 Boroughs of KMC with its central office. Photo: Sushanta Patronobish