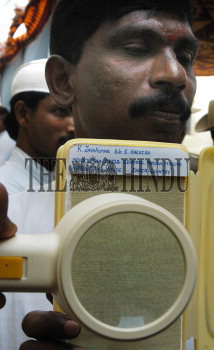 Caption : K. Jayakumar displaying the postcard at the Mysore Central Jail premises on August 16, 2006. Jayakumar is CONVICT No. 13,322 lodged at the Mysore Central Jail, who has utilised his spare time to earn a place in the Guinness Book of World Records. Jayakumar has made an attempt to break the record for maximum entries on a postcard. Jayakumar, who started his work two-and-a-half months ago, has written "India" on a postcard 15,217 times with a pencil. In all, the postcard contains 76,085 letters. Photo: M.A. Sriram