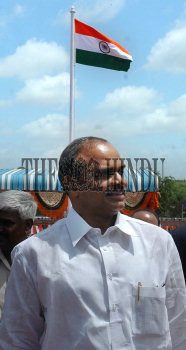 Caption : Andhra Pradesh Chief Minister Y.S. Rajasekhara Reddy is all smiles as he walks back after reviewing the ceremonial Independence Day parade at the Secunderabad Parade Grounds in Hyderabad on August 15, 2006. Photo: Mohammed Yousuf