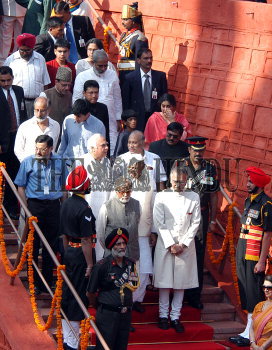 Caption : Dignitaries leaving the Red Fort in New Delhi after the Prime Minister Manmohan Singh's address to the nation on the occasion of the 60th Independence Day Celebration, on August 15, 2006. Seen among the dignitaries are the former Prime Minister, I.K. Gujral and the Union Ministers, Shivraj Patil, Kapil Sibal and Raghuvansh Prasad Singh. Photo: Kamal Narang