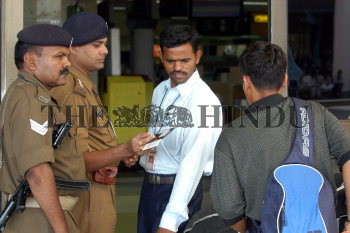 Caption : Paramilitary personnel on alert at the Indira Gandhi International (IGI) Airport in New Delhi on August 12, 2006. The US Embassy has warned that the Indian cities of New Delhi and Mumbai could be targeted by Al-Qaeda militants ahead of next week's Independence Day celebrations. Indian authorities immediately raised the alert in the capital New Delhi and the financial hub Mumbai, which had already been under heightened security for celebrations. Photo: Shanker Chakravarty