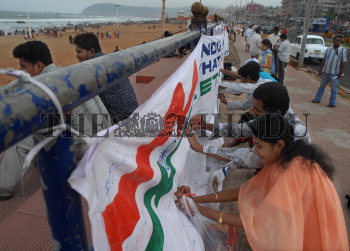 Caption : Youngsters appending signatures to a huge banner put up by Rotary and Rotaract Club of Visakha Steel City to express city's resolve to fight against terror in Visakhapatnam on July 23, 2006. Two such banners which were put up on the beach road will be presented later to President A.P.J. Abdul Kalam. Photo: K. R. Deepak