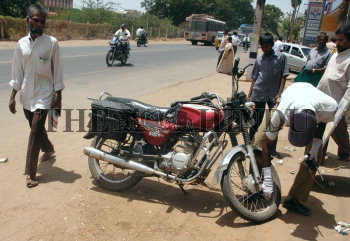 Caption : A traffic policeman, who was on duty during the visit of the Governor to Madurai on July 06, 2006, releasing air from a two-wheeler which was parked on the roadside opposite to the district Court premises. Photo: G. Moorthy