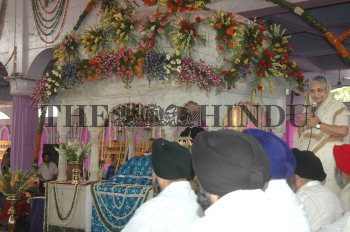 Caption : The Delhi Chief Minister Sheila Dikshit during the prayer on at Gurdwara Rakabganj in New Delhi on June 16, 2006, on the occasion of 400th martyrdom anniversary of fifth Sikh Guru Arjan Dev. Photo: Anu Pushkarna