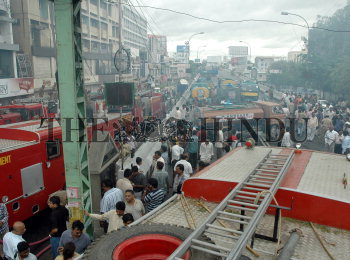 Caption : The Basheerbagh flyover turned into bay for water tankers that replenished the snorkels and fire-engines to put out the blaze that engulfed the National Insurance office at Moghul's Court at Basheerbagh in Hyderabad on June 02, 2006. Photo: P.V. Sivakumar