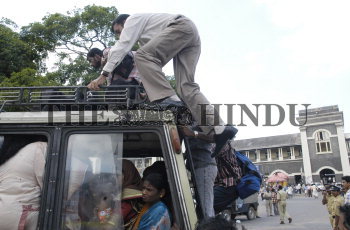 Caption : Commuters scramble up a van in front of the railway station in Thiruvananthapuram in the absence of regular bus services in the district on May 10, 2006 following the dawn-to-DUSK hartal called by Bharatiya Janata Party in protest against the killing of one of its workers in Kilimanoor on May 09, 2006. Photo: C. Ratheesh Kumar