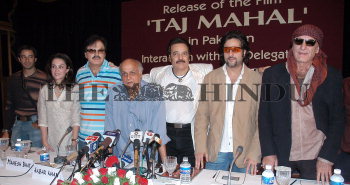 Caption : Members of the delegation of Bollywood film personalities to Pakistan (from right), actor-producer Feroze Khan, actor Fardeen Khan, director AKBAR Khan, director Mahesh Bhatt, actor-producer Sanjay Khan, Pakistani actress Sonia Jehan and actor Zulfikar Syed, at a press conference in New Delhi on the eve of their departure to Pakistan on April 24, 2006. Union Minister for Tourism and Culture, Ambika Soni (not in picture), is taking a delegation of Bollywood stars to Pakistan on an invitation from the Pakistani Government to attend the premiere of Indian director AKBAR Khan's film "Taj Mahal" in Lahore on April 26. "Taj Mahal" is the first Indian film in four decades that is to be screened commercially in Pakistan. Photo: S. Subramanium