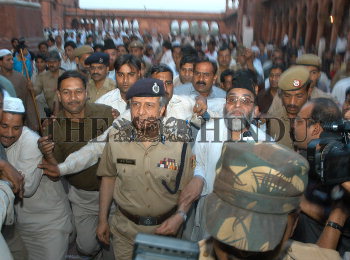 Caption : Delhi Police Commissioner K.K. Paul along with the Shahi Imam of Jama Masjid Syed Ahmed Bukhari inspecting the bomb blast site on April 14, 2006. Fourteen persons, including a woman and a girl, were injured in the twin explosions inside the Jama Masjid in the Walled City area in Delhi soon after evening prayers on Friday, April 14. Initial investigations indicated that low-intensity crude bombs were used. According to eyewitnesses, the first explosion took place at 5-20 p.m., soon after the 'namazis' went to a tank at the centre of the mosque to clean themselves. Realising that it was a bomb blast, the mosque authorities immediately urged the 'namazis' to stay away from a polythene bag found near the tank. Policemen stationed outside Gate No. 1 of the mosque rushed inside. Just then, the second bomb exploded and more people were injured. They were taken to the nearby Lok Nayak Jayaprakash Narain Hospital, where they were stated to be out of danger. Photo: Shanker Chakravarty