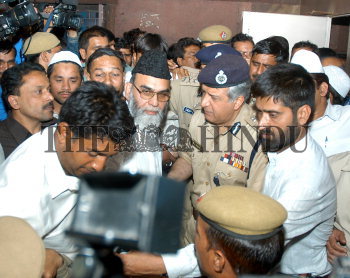 Caption : Shahi Imam of New Delhi's Jama Masjid, Maulana Syed Ahmed Bukhari seen with Delhi Police Commissioner, Dr. K.K. Paul, at the blast site inside the Jama Masjid, in New Delhi, on April 14, 2006, after twin blasts struck India's largest mosque. Fourteen persons including a woman and a girl, were injured in the explosion, which occurred soon after the evening prayers. Photo: Shanker Chakravarty