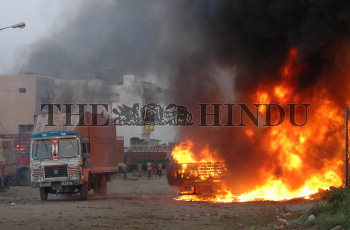 Caption : Mob frenzy TURNED APMC Yard in Yeshvantpur into an inferno like many other places in Bangalore, following the death of Kannada film actor Rajkumar, ON April 12, 2006. Many lorries loaded with goods were set ON fire at the yard. Private vehicles like cars and petrol bunks were also not spared. In short west Bangalore almost TURNED into a war zONe, in Bangalore, ON April 13, 2006. Photo: K. Murali Kumar