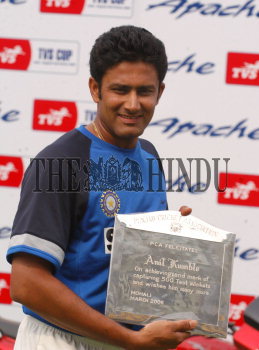 Caption : Indian player Anil Kumble smiles as he poses with trophy which was presented to him on taking 500 WICKETS, during the presentation ceremony of the second cricket Test match between England and India at the PCA Stadium in Mohali, India, on March 13, 2006. India beat England by nine WICKETS in the match and leads the three Test series by 1- 0. Photo: S. Subramanium