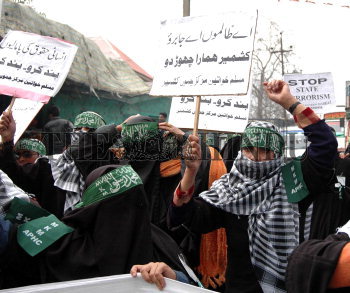 Caption : Activists of female Kashmiri group, Muslim Khawateen Markaz (MKM) shout slogans, as they stage a demonstration outside the offices of The United Nations Military Observers Group for India and Pakistan in Srinagar on March 06, 2006, as they demand an end to human rights VIOLATIONS by security forces and the release of political detainees. Photo: Nissar Ahmad