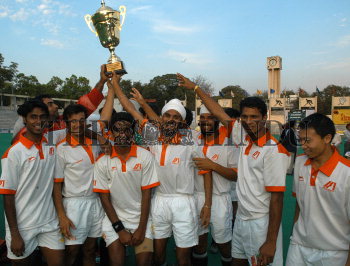 Caption : The victorious Indian Airlines team celebrates with the trophy after beating the Bharat Petroleum team in the final of the second All India Maharaja Ranjit Singh hockey tournament at Shivaji stadium in New Delhi on March 05, 2006. Photo: Shanker Chakravarty