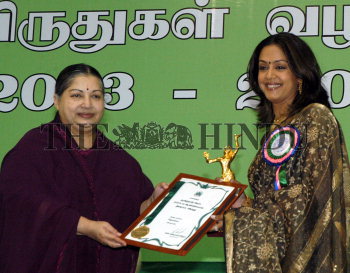 Caption : Actress Jyothika receiving the Best Actress Award for the year 2004 for her role in the film "Perazhagan" from the Tamil Nadu Chief Minister, Jayalalithaa, in Chennai on February 23, 2006 at a function for presenting the State Film Awards for the year 2003 - 2004. Photo: V. Ganesan