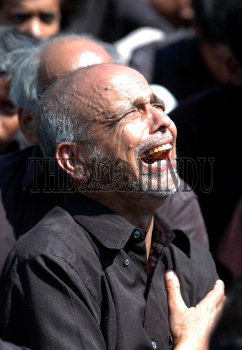 Caption : A mourner weeps at the protest rally taken out by the Shias, in Hyderabad on February 23, 2006 against the bomb attack on the one thousand year old Al -Askari shrine that houses the tombs of two Shia Imams,in Samarra,Iraq. Photo: P.V. Sivakumar