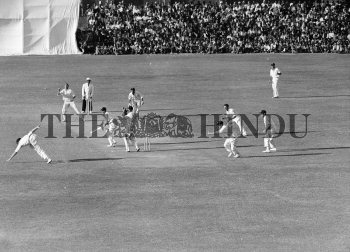 Caption : Australian fielder Alan Davidson fails to catch the ball hit by Indian batsman R.G. Nadkarni off the bowling of RICHIE BENAUD during the first cricket Test match between Australia and India at New Delhi in India on December 16, 1959. Photo: Hindu Photo Archives