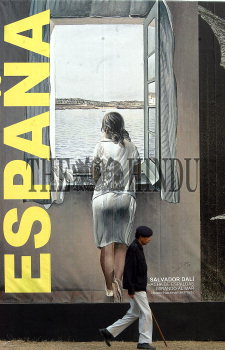 Caption : A visitor passing by a huge painting of the great masters of Spain outside the Theme Pavilion is designed as a replica of an important piece of architecture of the Theme Country Spain at the 31st Kolkata Book Fair inaugurated in Kolkata on January 24, 2006. AUSTRALIA is the ‘Guest of Honour’ country of this book fair, which will be held from 25 January to 5 February 2006 at Kolkata Maidan. The fair has been inaugurated by Dr. Maria Fernanda Santiago Bolanos, one of the most important contemporary authors of Spain. Photo: A. Roy Chowdhury