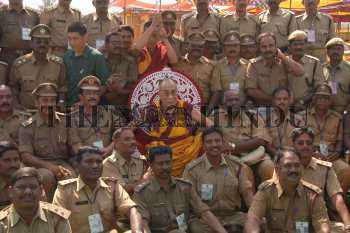 Caption : The Police personnel who were on duty at Kalachakra-2006, a religious event, which is being held at Amaravathi in Guntur district of Andhra Pradesh, for nearly two weeks, get themselves PHOTOgraphed along with the Dalai Lama, on January 15, 2006, as the ceremonies nearing completion. PHOTO: Ch. Vijaya Bhaskar