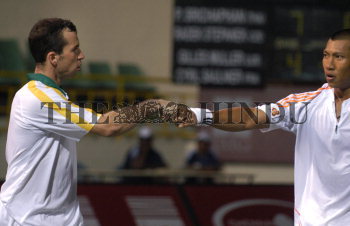 Caption : Radek Stepanek (left) of Czech Republic and Paradorn Srichaphan of Thailand, who beat Gilles Muller and Cyril Saulnier (not in pix.), greet each other during their doubles first round match in the Chennai Open tennis championship at the Nungambakkam Stadium in Chennai on January 02, 2006. Photo: Vino John