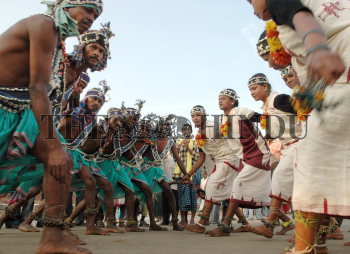 Caption : Primitive tribes from Bastar district in Chattisgarh performing a traditional dance during a rally organised on the eve of Visakha Utsav, a cultural festival to be held, in Visakhapatnam, on January 08, 2006. The five-day tourism-oriented festival will showcase aspects of the coastal city and the tribal areas of the district at large. Photo: K.R. Deepak