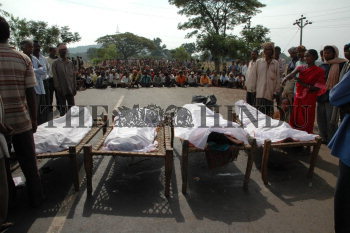 Caption : Agitating armed tribals along with four dead bodies awaiting the post mortem of their associates killed by police firing on January 02, 2006, during the construction activity of Tata Steel in Kalinga Nagar industrial hub in Jajpur. They are seen blocking the Paradeep-Daitari road in Goborghati on January 02, 2006. Photo: Ashoke Chakrabarty, Bhubaneswar