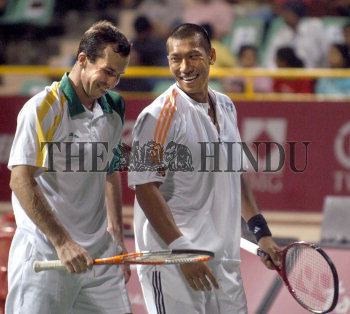 Caption : Radek Stepanek (left) and Paradorn Srichaphan sharing a lighter moment after winning a point in the doubles match against Gilles Muller and CYRIL Saulnier pair (not in pic) in the Chennai Open tennis championship at the Nungambakkam Stadium in Chennai on January 02, 2006. Photo: R. Ragu