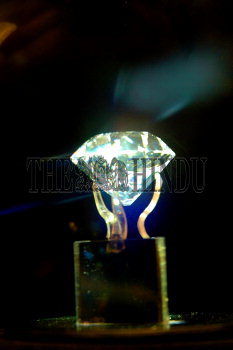 Caption : The world's sixth largest Jacob diamond, worth about Rs. 400 crores is believed to have been found as a rough stone in an African mine and was brought over by a syndicate in Amsterdam where it was cut in a style that prevailed about 100 years ago. It was brought to India by one dealer, Alexander Malcon Jacob, a mysterious figure and confidant of Indian Maharajas reported to have been born in Italy as a Roman Catholic whose full name appears as Ali Mohammed Yacob, immortalised in Kipling's novel Kim as Lurgan Sahib of the British Secret Service. He sold the diamond to the Sixth Nizam, Mehboob Ali Pasha in 1891. This is now on display at the two month long show at the Salar Jung museum in Hyderabad. Photo: Mohammed Yousuf 01/01/2006