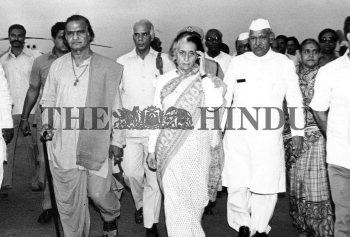 Caption : Mrs. Indira Gandhi, Prime Minister of India, arrives at the Hyderabad airport on October 14, 1984, at the end of the whirlwind tour of the drought affected areas of the Andhra Pradesh. She is flanked by the Chief Minister Mr. N.T. Rama Rao and the Governor Dr. Shankar Dayal Sharma. Mrs. Gandhi had earlier dismissed Mr. N.T. Rama Rao as Chief Minister on August 16, 1984 through Governor RAMLAL and installed her partyman N. Bhaskara Rao as Chief Minister. Following countrywide uproar, Mr. Rama Rao was reinstated as CM a month later. PHOTO: THE HINDU ARCHIVES