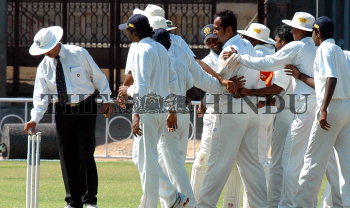 Caption : Hyderabad medium pacer N.P. Singh, who scalped 300 wickets, being congratulated by teammates during the Ranji Trophy Elite Group 'B' cricket match between Haryana and Hyderabad at the Rajiv Gandhi Stadium (Uppal) in Hyderabad on December 18, 2005. N.P. Singh dismissed Haryana's Bageshwar Bisht to reach the 300-wicket mark and became the third bowler to do so after Venkatapathy Raju and Kanwaljit Singh. Photo: Mohammed Yousuf