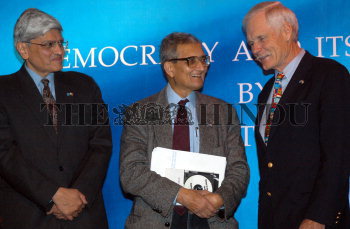 Caption : Nobel Laureate Amartya Sen flanked by Ted Turner, Chairman of Board of Directors of UN Foundation (right) and Gopal Gandhi, Governor of West Begal (left) during the Public forum "Democracy and its Critics by Amartya Sen", in New Delhi, on December 15, 2005. Photo: V. Sudershan