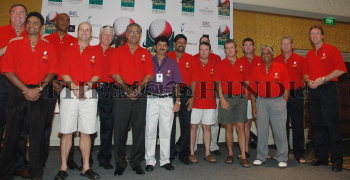 Caption : Former cricketers from eight Test playing countries proudly pose for a photograph during a press conference of the World Golf Championship for Cricketers in Bangalore on November 24, 2005. The first ever championship of this kind will be held at the Karnataka Golf Association course in Bangalore tomorrow. India's Kapil Dev is also seen. Photo: G.P. Sampath Kumar