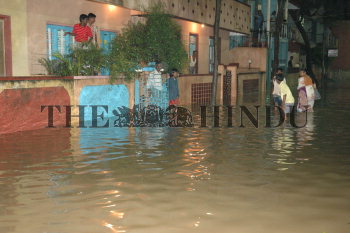 Caption : Gupta Layout in Ulsoor was flooded knee-deep as storm water rushed in from Ulsoor nala on October 25, 2005 evening. The nala is flowing dangerously high due to heavy discharge from Ulsoor Lake, which in turn is getting heavy inflow from areas as far as Cox Town. Irate residents complained that all vehicles parked on the road were ruined by the water and car owners were the most furious lot, in Bangalore. Photo: K. Murali Kumar