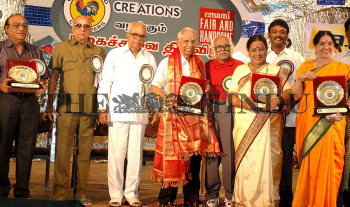 Caption : At a function on October 23, 2005, at Kamaraj Arangam in Chennai, four comedy actors were honoured with different awards. The awards were given by "Cho" S. Ramaswamy, K. Balachander and Jayakanthan. The comedy actors who received the awards were "Vennira Adai" Murthy, NAGESH, Manorama and Sachu. Photo: R. Shivaji Rao