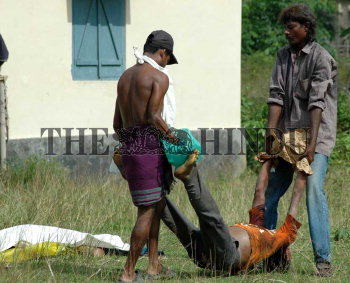 Caption : Relatives of the riot-hit Karbi people shift a dead body at the Kherani police station in Central Assam's Karbi Anglong district, 270 kms. away from Guwahati city on October 18, 2005. In one of the terrible incidents in the recent history of Assam State, at least 22 Karbi tribals, including eight women, were hacked to death and three injured by militants on the morning of October 17, 2005, in strife-torn Karbi Anglong hill district of Central Assam. Unidentified militants, with their faces covered in black cloth, waylaid two buses coming from Jirikinding to Hamren and the district headquarters of Diphu at Jengkha at around 8 a.m. The insurgents then identified Karbi passengers and after asking them to alight from the Diphu-bound bus, hacked them to death before setting their buses on fire. More than 40 people were killed, 25 villages have been burnt down, and thousands have become homeless since the onset of Karbi-Dimasa ethnic clash in the hill district of Assam. Photo: Ritu Raj Konwar