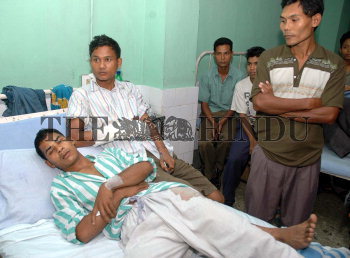 Caption : Supporters of the Garo Students Union, are being admitted in the Tura Civil Hospital, in West Garo Hills of Meghalaya State, Northeast India on October 3, 2005 following police firing at the meeting of students in Tura on September 30, 2005. A magistrate enquiry order has been issued on the shoot out incident, where five students are shot dead by CRPF personnel. Photo: Ritu Raj Konwar