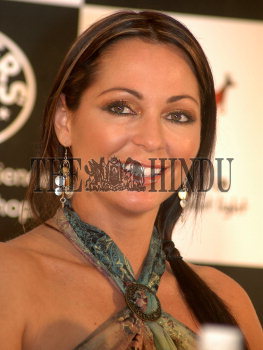 Caption : Australian actress Tania Zaetta during the Shoppers Stop's biggest celebration of the year "Down Under Fest", an Australian Promotion in association with Tourism Australia, Quantas Airways and Rio Australian in Bangalore on October 06, 2005. Photo: G.P. Sampath Kumar