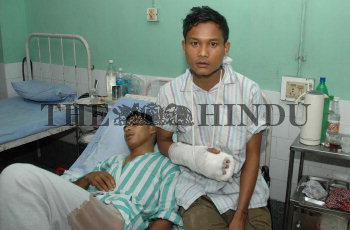 Caption : An injured supporter of the Garo Students Union is being admitted in the Tura Civil Hospital, in West Garo Hills of Meghalaya State on October 03, 2005 after getting hurt by a bullet while the police opened fire at the students’ meeting held in Tura on September 30, 2005. A magisterial inquiry order has been given on the shoot out incident in which five students were shot dead by the CRPF personnel. Indefinite curfew imposed by the district administration in Tura since the incident is being continued for the fourth day, with no sign of a let-up. Photo: Ritu Raj Konwar