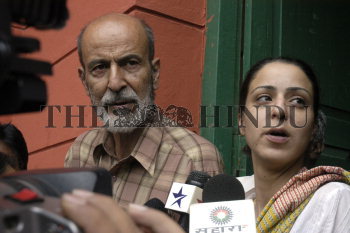 Caption : Akbar Khalili (left), former High Commissioner of India to Australia, first husband of Shakereh (who was murdered in her house on Richmond Road in1991) with his daughter Ishmath after Karnataka High Court confirmed the death sentence on Shraddananda, who was found guilty of murdering his wife Shakereh, in Bangalore on September 19, 2005. Photo: K. Gopinathan