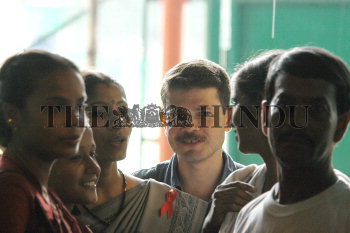 Caption : Madhuri, Kakoli, Arunabha, Tumpa, Sikha and Jibon, the HIV infected members of 'Bengal Network for PEOPLE Living with HIV/AIDS' are in dark today due to the killer virus. The organization which supports the HIV infected PEOPLE organized a press conference to convey their agony over the ill-treatment on HIV infected patients from the society. According to the organization, a large number of HIV/AIDS patients are being ill-treated, humiliated and forced to shed their identities in public because of the social stigma associated with it. They are being forced to live in disgrace. According to NACO, India has reached at a number of 1,11,608 persons infected by the killer HIV virus till July 2005. Photo: A. Roy Chowdhury 31-8-2005