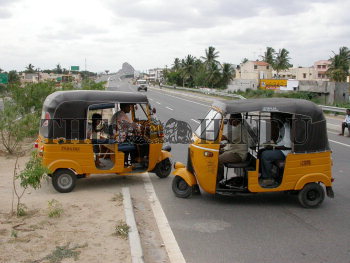 Caption : Throwing traffic rules to the winds, these two autorickshaws coming in different directions are trying to cross over the road divider (median) simultaneously at the same point, trampling upon the median itself at Krishnagiri on August 24, 2005. Thus they not only expose themselves to the risk of being hit by one another but also by the passing vehicles and thereby endangering many lives. Photo: N. Bashkaran