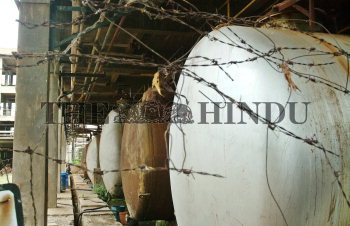 Caption : The tankers used to store carbon-di-sulphide at the defunct South India Viscose at Sirumugai near Coimbatore. A suspected leak caused panic in the area on August 16, 2005 which resulted in a road blockade by the residents. Photo: K. Ananthan