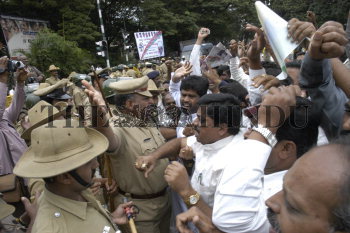 Caption : SC, ST, Dalits and Minority supporters of Siddaramiah staging a protest against the JDS party decision against Siddaramaiah by blocking the Basaweshwara Circle in Bangalore on August 03, 2005. Police arrested the agitators when the tried to break into police corridor. Photo: K.Gopinathan